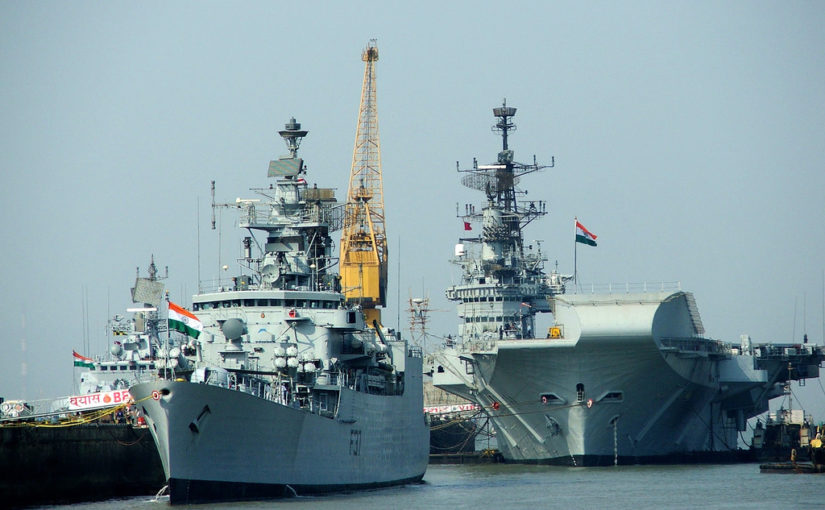 India has had a close affinity with the oceans since the time our ancestors first settled here. We have heard of the naval might of the Indus Valley civilization, as well as that of the latter kings of the South. Surrounded by water on three sides, India has one of the longest coastlines in the world, which is an opportunity as well as a threat. Consequently, over the years post-independence, we have developed a strong defence to protect incursions from the water. In this article, we shall see how the different branches of coastline protection have developed, as well as their individual duties and responsibilities.

The duty of safeguarding our coast is distributed mainly among three forces of India – the Indian Navy, the Border Security Force, and the Indian Coast Guard. Some of their principal responsibilities include protecting our naval borders, patrolling for external threats via sea, and maintaining security in the Indian maritime territory. Let us now see how these forces, armed and otherwise, have evolved over the decades, making India the strong maritime power it is today.

In the modern era, after the British and Portuguese colonized India, the navies of local kings became practically non-existent. The first official name of the organization that would later become the Indian Navy was the ‘Bombay Marine’. This flotilla of ships was used by the British in various campaigns around the world, whence it was renamed as ‘Her Majesty’s Indian Marine’. By the late 19th century, the name had changed to ‘Royal Indian Marine’ and comprised of 50 vessels.

With the onset of the first world war, the ships of the Royal Indian Marine were used to ferry soldiers to the battlefields of Europe. In addition, some ships provided medical assistance, carrying wounded soldiers to safer shores. These ships and sailors were invaluable during these years of service, with several personnel being decorated with gallantry awards.

The second world war saw the Royal Indian Marine become the Royal Indian Navy, which, though very small, played a crucial role in the battles of Sicily and Seychelles. In 1946, the officers of the Royal Indian Navy mutinied against the British, fighting alongside other resources for independence. The force we see today was finally born on Jan 26, 1950, the day India became a republic, with the navy being rechristened as the ‘Indian Navy’.

In the immediate years after independence, the navy comprised of 32 seaworthy vessels – frigates, sloops, trawlers, minesweepers, and a single survey vessel and corvette. that were limited to a patrolling capability on sea. The BSF and ICG did not exist then and the Indian navy was solely responsible for complete coastline protection in the country. This navy was further split between India and Pakistan, following the partition in 1947. The Indian Navy was primarily seen in a military role in the subsequent years, with the annexation of Goa and the Indo-Pakistani wars of 1965 and 1971.

In the pre-independence period, the officers onboard ships had been British while Indians were employed as deckhands. As a result, there was a severe lack of personnel in the years following independence, which led to a growing need for indigenization of the Navy. During this period, the principal focus was on the recruitment and training of skilled staff to generate manpower as well as the refitting and refurbishment of the Indian fleet, such as it was.

However, as the wars declined, the Navy adopted a more diplomatic and constabulary role, aided by the formation of the Border Security Force and the Indian Coast Guard.

The Border Security Force of India was formed in 1965 to protect the frontiers of the nation from external threats. Speaking specifically with respect to coastline protection, the marine wing of the BSF worked actively to protect riverine borders from imminent threats. As an armed force, it employed a slew of boats and ships, such as medium crafts, mechanized and speedboats, rigid inflatable boats, fast patrol boats, and more. In addition, it set up a number of floating border outposts to keep a weather eye out for insurgence attempts and prevent illegal immigration.

As the duties of the Indian Navy expanded to encompass search and rescue operation in addition to its military and coastline protection roles, the government decided to create a separate force dedicated to managing the coastal affairs. This resulted in the creation of the Indian Coast Guard in 1978, an armed force operating under the Ministry of Defence. Initially, the ICG was primarily responsible for managing non-military operations in the Indian maritime areas, such as patrolling, preventing smuggling and piracy, and providing a modicum of security for the local fishermen and sailing fraternity. However, it was later equipped with military equipment and boats, transferred from the Indian Navy, and placed under the Ministry of Defence in a more combative role.

The modernisation of equipment for coastline protection increased exponentially in the latter half of the 20th century and numerous commissions for indigenous boat manufacturers were issued. This steady development has resulted in the large fleet of boats, ships, submarines, and aircrafts we see today, employed by the coastline protection forces.

Coastline Protection in the 21st Century

The electronic revolution in the 21st century has led to an unprecedented growth in the modernisation of the coastline protection equipment in India. Advanced fire control systems, sensors to detect shortfalls and aid information processing, automation systems to provide ease of operation, and modern methods of energy sourcing made the force technically stronger than ever before.

Massive strides in ship design, increased options for boat and ship materials, and a pervading desire to build better sustainable boats has dominated the efforts of manufacturers in the country. The operations of the three coastline forces have become more independent, as they work in greater harmony to protect the integrity of our coasts.

Another factor that has reinforced the need for a technologically advanced coastal protection force relates to the global and national events that have strongly affected the country. Incidents such as the Mumbai terror attacks on November 26, 2008, wherein the perpetrators came via sea, or the recently issued decree by the IMO to curb sulphur emissions and set a carbon cap on boats have had a great influence on the way the organization of these forces have developed.

As a result, the Indian maritime protection force is one of the strongest maritime forces in the world today, making India a leading maritime power across the globe.

The primary responsibility of the coastline protection forces currently is peacekeeping in Indian maritime areas. However, the rising tensions amongst the neighbouring countries requires it to be ready for combat at a moment’s notice. The total fleet of the navy, BSF, and the ICG together is a veritable arsenal of frigates, corvettes, nuclear-power submarines, fleet tankers, an amphibious dock, patrol boats, fleet tankers, offshore vessels, immediate support vessels, ambulance boats, and more.

The coastline protection forces are now rapidly employing a technically savvy approach, with several indigenous projects being launched to enhance the technical capabilities of the fleet. Government initiative such as the Make in India campaign and the support of local manufacturers has further helped our aim of becoming a building force as opposed to a buying force on the maritime front.