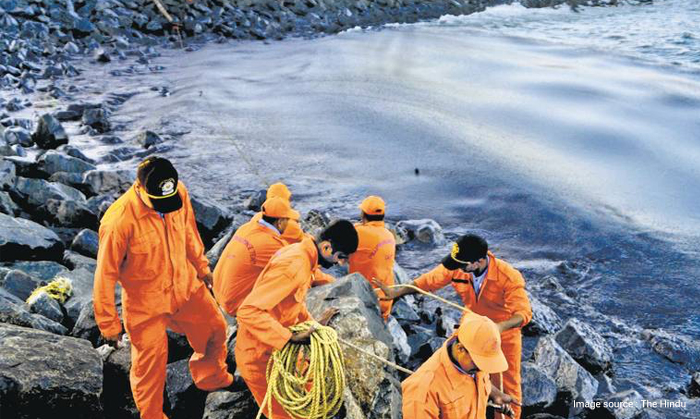 “It is submitted that despite the collision warning issued by the Port Control, both vessels did not take appropriate steps, which resulted in the collision at 03:45 hours,” – The Chairman of the Kamarajar Port Trust Ltd, The Hindu, Feb, 21, 2017

It is estimated that in excess of 300,000 liters of oil per day contaminated the sea, equivalent to pouring 10 Olympic swimming pools of toxic sludge into the ocean over the months the spill continued – Timor Sea Oil Spill, 2009. The Jakarta Post dated Feb 21, 2017

Makes your souls cringe right? The frequency of these types of news clippings is increasing day by day due to various reasons, right from collision of vessels to a valve in the oil tanks that go unnoticed. No matter what the reasons are, oil spills can be easily categorized as the most dangerous type of pollution with long lasting effects. In Spite of the gruesome effects quite widely known, shipping companies fail to take necessary precautions, and poisoning the environment, head on.

Oil spills are caused when dense liquid hydrocarbons or crude oil is released into the ocean or on land in disturbingly high amounts.. In water bodies, the spill occurs due to drilling rigs, offshore oil platforms, barges, pipelines, refineries, drilling rigs, and storage facilities and offshore wells. Barring these scientific reasons, oil spills have known to occur throughout the history of time (pun intended) when ships fail to abide by the basic rules of safety and preventive measure put forth to avoid a spillage. What is common in all of them is that the damage caused by them is permanent and takes a long time to clean up making it a highly dangerous and the most toxic form of pollution.

Oil spill in water is more difficult to tackle. More than the leakage it’s the aftermath that creates a dent in the ecosystem and the livelihood of people who are dependent on marine habitat for their produce.

Effects of Oil Spill on the Environment

The shiny, rainbow colored substance floating on the water is nothing less than a layer of death. As brutal as that might sound, both, the environmental and livelihood effects of this disaster are nothing less than fatal.

Oil spill casts a slick, sticky charcoal grey coloured layer of oil (with a strong suffocating stench of tar) that covers the water surface, obstructing sunlight. Due to this, the phytoplanktons or plants growing at the bottom of the sea cannot photosynthesize due to absence of sufficient sunlight, leading to their death, if left untreated.

The substance is so toxic that it can cause massive loss of species that live in the sea. Oil spill penetrates into the plumage and fur of birds, breaks down the insulating capabilities of feather which makes them heavier, disallow them to fly and kill them via poisoning or hypothermia. Presence of dense crude oil restricts marine animals from absorbing oxygen through the water. And it doesn’t stop there. This oil laden water enters their gill slits, suffocating them to death.

“Many baby animals and birds starve to death, since their parents cannot detect their natural body scent. Birds that preen themselves to get rid of the oil accidentally swallow the oil and die due to the toxic effects. In many cases, the animals become blind due to repeated exposure to the oil. Dolphins, sea otters, fish, countless species of birds and many oceanic mammals face these consequences. Countering these effects and cleaning the oil can take anywhere between a few weeks to many years, depending on the damage caused.” – Source: Conserve-Energy Future

Salt water fishes and animals like crabs, prawns, lobsters fetch a far higher price in the market than the freshwater ones. Fishermen are affected the most when thousands of fishes die due to the after effects of oil spill causing a serious dent in their livelihood. Places with beaches suffer a huge setback in their tourism when the once beautiful waters are now covered with stinking tar, dead birds, tar balls and other unsavory sights.

With the frequent occurrence of Oil Spill, it was necessary to come up with options when this disaster strikes. The severity of this was far more advanced because Oil Spills take years to clear up. But nature has its own way of healing. The heavy oil droplets sink below water, breakdown and are taken care of by the salt water and wind. Oil ingesting bacteria over the time, consume the oil in the water breaking down the hydrocarbons, allowing them to get evaporated in sunlight.

Use of tools and techniques like Oil dispersants, containment domes immediately after the spillage could serve as a ray of hope to the marine habitat. Oil Spill kits like the ones by SHM, offer tools for an immediate response to combat the spread of spillage.

Oil dispersants are the first item of response in case of an oil spill. These are chemicals that break down the dense and slick crude oil liquid into smaller droplets, making them easier for oil ingesting microbes to consume and also get evaporated by natural processes. Oil dispersant don’t restrict the spillage or spread of oil, but instead change the chemical properties of the oil, making them easier to be ingested and broken down.

Containment domes are huge vertical metallic domes that are lowered into the slick laden water to suck up the contaminated water into the ship to be taken ashore for treatment.

If you happen to drive down to Kamarajar Port in Chennai, you will be welcomed with a coastline covered with thick semi dried tar, pungent odour and grayish black shining water. What exactly happened?

At 3:30 am on January 28, the BW Maple, a gas carrier carrying liquefied petroleum gas (LPG) from Ras Laffan in Qatar, eased past the breakwaters of the Kamarajar Port, picking up speed as it headed out into the open waters of the Bay of Bengal.

Out at sea, another tanker, the MT Dawn Kanchipuram, laden with 32,813 tonnes of petroleum lubricant, had slowed down as it approached Kamarajar’s harbour “channel” — the deep passage carved into the sea-bed to allow ships to enter port without running aground.

At 3:45 am, the Maple crashed prow-first into the side of the Kanchipuram.

“I saw the two ships collide,” said Arikam, a young fisherman who was out on his boat that morning. “Oil gushed into the sea like blood from a wound.”

The oil spill that happened in January this year has turned a beautiful beach into a graveyard. More than 20 marine dead turtles and thousands of fishes have suffocated to death due to this oilspill. Around one lakh fishermen have been affected following the oil spill. Indian Institute of Technology (IIT) experts, who analysed the samples of the pollutant, have found that it contains zinc, manganese, copper, nickel, lead, cobalt, chromium (total), cadmium and selenium, besides other heavy polyaromatic hydrocarbons and asphaltenes.

As volunteers try to clean up the oil on the sea, the babus are trying to clean up their mess. A port that big, should have ideally been in a position to combat this situation. Why that did not happen, is an altogether different debate. In a bid to enhance its oil spill response capacity, the Chennai Port Trust intends to procure flex barges, which could contain 40 tonnes of oil in the event of another spill, and has floated tenders for a new oil spill response vessel. The new vessel would come as an addition to an existing oil spill response vessel, Prestige, which can contain 100 tonnes of spillage. Oil spills are known for their long term fatal effects, harming the marine environment, the flora and fauna and rendering it unfit for survival till cured completely. Although oil spills have been around for a very long time, the subsequent technological advancement in order to combat this disaster, still hasn’t kicked off. The innovation which could cure the oceans of the oil slick needs to be sustainable, fast and environmentally friendly to ensure least ecological damage.

Solutions will still be found, but the problem lies in controlling this disaster. Shipping companies, have to bear the responsibility of ensuring that no such disaster takes place due to their actions. How the shipping companies tackle this to avoid creating an oil laden grave, is yet to be seen.