Seafaring was in vogue during the 19th and early 20th century when air carriers were yet to set a firm footing in international transport. Passenger transport through ships was much more frequent than it is today, and so were the accidents and disasters that took place along with it. The annual loss of life from British ships alone averaged between 700 and 800 during this period. When the invincible, White Star Liner Titanic, the safest ship of her times, drowned in the Atlantic in 1912 killing more than 1500 passengers and crew, the international fraternity felt the need to have a set of guidelines that would make seafaring safer. And that’s when SOLAS was born.

How Did It Come Into Action?

The International Convention for the Safety of Life at Sea was adopted first at a conference held in London in 1914. This convention touched upon various chapters of safety at sea like navigation, construction, radiotelegraphy, life-saving appliances, and fire protection. But the central aspect of 1914 SOLAS convention was laws and rules to prevent loss of human life at Sea.

These countries have pledged to apply the SOLAS laws under their country’s flag. The SOLAS agreement covers a broad range of areas coming under seafaring and water transport like passenger ships, cargo, tankers, defense, patrol, hazardous material transport, nuclear transport, to name a few.

Every chapter and regulation listed in the SOLAS convention, lays focus on some or the other shipping safety, communication and cargo carriage parameter. Our focus here is to make understanding SOLAS easier for everyone. Listing all the chapters and sections would be a tedious read for our readers and so we have selected a few important bytes from SOLAS which we feel are crucial and elaborated them here.

Inclusion of Life Saving Appliances / Safety Equipment according to SOLAS

The 1960 SOLAS Conference was fundamental from the point of view of technical safety measures prescribed by IMO. Safety equipment, clothing and lifeboats received additional importance in the years to come. Here are some of the amendments in the early years of SOLAS that created path-breaking shipping safety rules and regulations.

The amendments of 1966 and 1967 lay focus on individual fire safety measures and arrangements for life-saving appliances on certain tankers and cargo ships. The subsequent regulations were drafted, voicing importance of navigational equipment (1968, ‘69), nautical publications, lifebuoys & life jackets (‘69 and ‘73), radio installations, ladders and hoists (’71 and ’73).

Fire fighting appliances like fire extinguishers, lifeboat air bottles, fireman’s suit, etc., life-saving appliances like Lifeboats, lifejackets, liferafts, transfer and descent equipment like ladders and gangway equipment have been included in the shipping safety portfolio as a must-have for all the shipping lines. Along with this, GMDSS carries high importance in signaling and communication at the ships.

The recent amendment of SOLAS, 2014 touched upon the inclusion of equipment and construction parameters to reduce on-board noise, rescue, and recovery of people who are in water and a necessity to include a minimum of duplicate two-way portable radiotelephone apparatus for each fire party for firefighters on board.

The basic technical provision of the SOLAS convention is, “ To specify minimum standards for the construction, equipment and operation of ships, compatible with their safety…Flag states are responsible for ensuring that ships under their flag comply with its requirements, and a number of certificates are prescribed in the Convention as proof that this has been done.”

Seafaring continues to be one of the world’s most dangerous occupations. The SOLAS convention has been the most important breakthroughs toward internationalization of seafaring law and safety measures. And, even today, SOLAS continues to be updated and amended for the ever-growing and ever-changing needs of the global shipping industry.

How Non-Compliance of SOLAS led to disasters which led IMO to make weight verification of containers mandatory.

In January 2007, the MSC Napoli came into trouble during a storm, which resulted in a forced beaching of the vessel. UK investigators weighed 660 containers stowed on deck and found 20% of these containers weighed over 3 tons more than their declared weights, with the total weight of all containers being 312 tons over what had been declared.

February 2011 saw an overloaded container weighing 28 metric tons break free from a crane at the Port of Darwin, Australia. The container fell 40 feet, narrowly missing two workers, with the weight reported on the cargo manifest as four metric tons.

Later that year in June 2011, a ship with 168 containers overturned while at berth in Algeciras. When investigated, 1 in 10 containers was overloaded, each weighing up to 7 times its declared weight, and altogether weighing four times the combined weight shown on the load.

Check out some of the upcoming SOLAS amendments that are bound to improve shipping safety and cargo management. 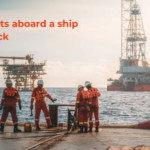 Accidents aboard a ship – On Deck