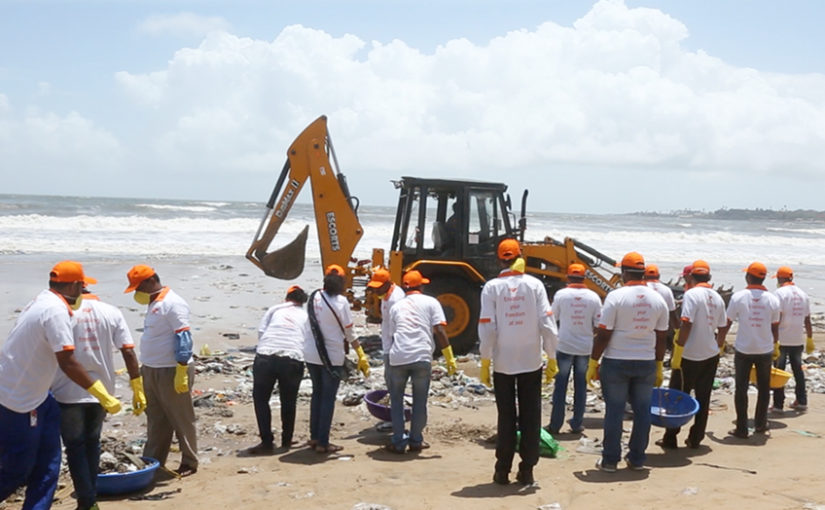 Every morning when he would open his window, a filth and plastic covered beach would greet him. Talk about a ‘Good’ morning. Afroz Shah is a lawyer by profession and a resident of Versova, living in his apartment that overlooks the Versova beach. The sorry sight of this once beautiful beach tugged at his heart and propelled him to wear his gloves and step out on the beach. His enthusiasm motivated other residents of Versova to join his cause and that gave birth to the Versova Residents’ Volunteer Committee.

Around 30% of Asia’s coral reefs could be lost in the next 30 years due to #climatechange. Let’s #SaveOurOcean: https://t.co/PbtXdVdtwK pic.twitter.com/bb26bQB1fN

What started on October 25th, 2015, 87 weeks later, today, 5 million kilograms of trash has been removed, turning this into the world’s largest beach cleanup. The Versova beach cleanup attracted volunteers from around the world, including UN Patron of the Oceans – Lewis Pugh, who, along with celebrities, children, corporate houses and residents of Versova joined the effort to clear the beach of all the trash. Afroz has been awarded the UN ‘Champion of the Earth’ award, setting an example for the country.

All stakeholders r going to clean the ocean on 4th JUNE at 1.30 at versova beach. A great way to connect with the Environment . # CleanSeas. pic.twitter.com/510S2eYuz6

Volunteering for a better & cleaner #India! Residents of #Mumbai show their support at @UNEP India’s beach clean up at Versova beach, India pic.twitter.com/2PqBc8jmZt

To celebrate World Oceans Day, SHM Shipcare along with 80 employees and their family members joined Afroz in the Versova CleanUp drive. On Sunday, June 4th more than 2000 volunteers, that included school children, NGOs, corporate houses, and residents joined the cleanup drive. Over 160 tonnes of filth has been removed so far rendering the beach as clean as never before.

The Champion of Earth, Afroz Shah is not resting on his laurels. His next step is to clean 19 beaches in Mumbai and seeks support from at least 5000 Mumbaikars to join him every weekend in the cleanup drive. To combat the littering which may arise out of increased tourist attraction, Afroz has a solution for that too.

“I have two machines in mind. The locals of the beach will handle the machines that convert plastic to oil, which they will use in their boats. The second machine can take in all garbage including compost and convert it into energy pellets which can be used by industrial plants. So instead of throwing anything in the ocean, you simply recycle it,” concurs Afroz.

You litter the beach, you clean it. It is as simple as that.