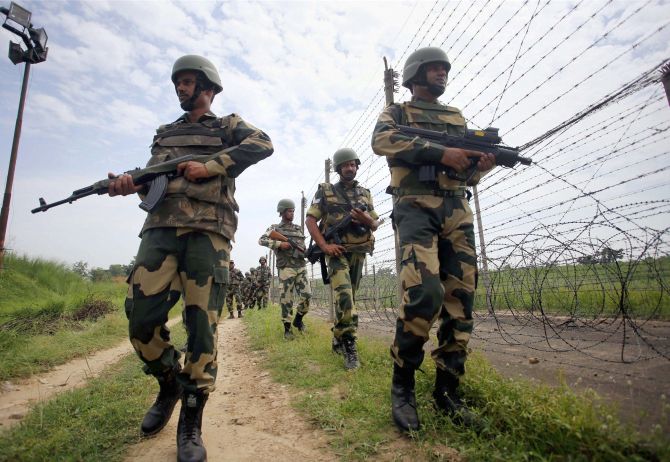 “You have been surrounded on all sides. Surrender now, or face the consequences!” yelled the Commandant.

His unit stood poised, in the darkness before the dawn, weapons trained onto the house facing them. Its broad, imposing structure was typically Kashmiri. There were no sounds coming from inside, but the Commandant knew their quarry was in there.

He yelled out his warning again, but the ominous silence continued. It was not the quiet, sleepy silence that usually prevailed at this hour though; it was a menacing silence, the very air feeling taut with tension as if the entire town was holding its breath.

“Surrender now, Ghazi!” roared another of the commandants.

Suddenly, the night air was rent apart by the screaming of AK-47s, and the Commandant knew: the terrorists had decided to engage them in a deadly encounter. Some of the bullets found their mark. With cries of pain, a Deputy Commandant sank to the ground, injured. There were deafening noises, and the earth shook as the grenades hurled by the cornered terrorists exploded, injuring more of his men. Their leader Ghazi Baba, the Commandant knew, was a desperate man willing to fight to the death. He gave the orders to return fire, and the battle was on!

11 hours of fighting later, orders were given and the house exploded under the wrath of mortar fire. The warriors would later enter the wreckage to bring out the bodies of the slain and confirm what they already knew:

Ghazi Baba was dead. The man responsible for the hijacking of Air India IC-814, for the kidnappings of foreigners in the Kashmir valley, the mastermind behind the attacks on the J&K Assembly and the Indian Parliament itself, had been killed.

On this historic day, one of India’s greatest, most ruthless enemies had been defeated, and many terror attacks avenged, all by the courage and heroism of the Border Security Force- one of the five Central Armed Police Forces and India’s First Line of Defence! The Founding of the Border Security Force

The Border Security Force (BSF) was founded in 1965, during the Indo-Pakistan war. Prior to this, there had always been independent state security troops, with each state managing their own defence and little inter-state coordination. The individual State Police Forces could not withstand an armed assault alone, as was witnessed when Pakistan attacked 3 distinct places in Kutch, in April 1965. A keen lack of a centralized force for protecting the borders of India led to the founding of BSF, a cohesive unit that came under the Home Ministry of India and was responsible for securing all land and water boundaries of our vast nation.

Over the years, the BSF has grown to encompass various units within the main structure. It is the only armed force in India to have its own Air Wing, Marine Wing, and Artillery Wing. The scope of operation is vast, ranging from communication and IT, engineering, technology, and administration, to law, medical, personnel, armaments, and more.

Today, the Border Security Force operates along all international and internal borders of India, with particular focus on the Indo-Pak border in the west and the Indo-Bangla border in the east. Three battalions of the BSF also make the National Disaster Response Force and are located at Kolkata, Guwahati, and Patna. These battalions are equipped with cutting-edge technology and multiple deployment solutions to ensure that they reach the afflicted areas in time. Responsibilities of the BSF

The BSF is charged with several duties during peacetime and wartime. During times of peace, its primary responsibility is to secure our boundaries, prevent trans-border crimes, and any illegal activities. In addition, the BSF also has to be vigilant for preventing illegal immigration or smuggling. It is responsible for stopping enemy infiltration and for collecting trans-border intelligence.

In wartime, the role of BSF is more demanding. In addition to their peacetime duties, soldiers of the BSF step in wherever the regular troops need aid. They are authorised to take limited aggressive action and control refugees. The BSF is also the primary guiding force for the land and naval forces of the country, in the border areas.

In the recent years, the responsibilities of the BSF have grown from protecting the border to include counter-insurgency and counter-terrorism activities as well.

Since its inception, the Border Security Force has seen action several times. It was first employed in the Indo-Pakistani war in 1971, aiding the regular troops against the enemy forces. The BSF also played a crucial role in the liberation of Bangladesh in 1971. BSF soldiers were employed in Operation Blue Star and Operation Black Thunder, to quell the rising unrest in Punjab in the 1980s. They were an integral part of the Vijay-Kargil War of 1999. The BSF also has engaged in several armed skirmishes along the Indo-Pak and Indo-Bangla borders over the past decades.

Equipment Used by the BSF

All the equipment used by the BSF is manufactured indigenously, from the uniforms to the ammunition to the vehicles. The ammunition used includes sub-machine guns, machine guns, pistols, assault rifles, sniper rifles, field guns, and more.

A wide variety of vehicles are used by the BSF, from land rovers, to planes and ships. Given the diversity of India’s borders, the BSF has to design and commission different kinds of planes and boats for effective use. For instance, in the Sundarbans to the east, the shallow rivers and floating roots necessitate boats with a smaller draft and propeller shaft angle. These boats are manufactured by indigenous boat developers, like SHM Shipcare, based on the requirements of the BSF.

With the growing Make in India movement, the sourcing and manufacturing of BSF patrol vehicles has taken a strong native turn. Developing the equipment within the country makes it more accessible, at a lower cost, and provides for easier maintenance and repair as well.

The BSF uses advanced technology and equipment to ensure that its various areas of control are seen to successfully, aided by the Indian manufacturers in this endeavour.

The Border Security Force is an integral part of our national security, one of the main reasons why we can sleep soundly in our beds. The force has been ever vigilant in the defence of the boundaries, taking progressive action from past experiences and attacks. On this day, as the Border Security Force completes 53 years, we take this opportunity to express our deep gratitude for all their efforts and sacrifices and vow to help them in their journey of protecting our nation.