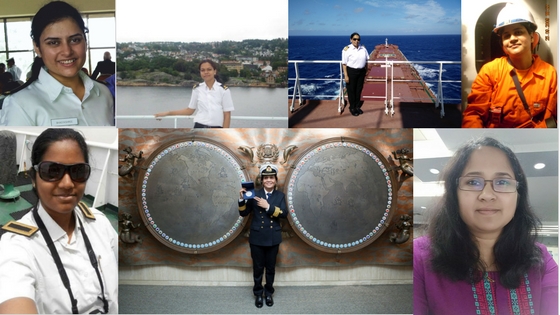 The maritime scenario in India is witnessing the dawn of a new era for women seafarers. Venturing into this primarily male-dominated society, women have been creating history at every step. They have overcome personal and professional hurdles, proving that they are as capable and strong as their male counterparts.

Today, on the occasion of International Women’s Day, SHM Shipcare had the privilege to chat with some of the most celebrated Lady Officers and Chief Engineers in the Indian maritime sector. A candid conversation with some of the most senior as well as younger women in the field gives us an idea of how shipping is progressively accepting women and how much farther there is to go.

The conversations touched on several topics, from the change in the mentality of the shipping industry to safety for women on board and career opportunities for women in the maritime sector to how the IWSF is bringing together women of the uniform.

Here are a few excerpts from their same.

The Changing Shipping Scenario for Women

The maritime sector has not witnessed a drastic change in perspective over the last quarter of a century, but it has not been static either. There has been a gradual acceptance of the fact that women are as fit for the field as men.

“When I entered into the shipping industry there weren’t any lady officers who I interacted with,” says Saifuddin Hajee, Founder-Chairman of SHM Shipcare, upon being asked how the perception of women officers has changed over the years. “Since the last 5-10 years, we have seen more women choosing a career at sea and this trend is definitely growing. I believe that today, women being at sea are no longer considered as much of an anomaly as they were in the past.”

Initially, when the number of female candidates verged on one or two in a batch of thirty-odd people, they were viewed as a liability. “The general perspective”, says Ms. Suneeti Bala, “was that why should a woman be trained, why should such a lot of time be invested if she was ultimately not going to continue in the industry?” This occurred from the grass-root level to the higher echelons of the sector.

As a matter of fact, there was great reluctance among shipping companies to employ women in the first place, irrespective of their capabilities or educational excellence. Ms. Sharvani Mishra narrated an incident where the companies that had come for placements to her college refused to interview the two female candidates, based on the assumption that they would not be capable enough. She did not lose faith in herself however and proved them wrong by becoming the first woman to sail on an Indian flag vessel!

The scenario onboard was somewhat better. True, there were some reservations about having women on the ship, but once they started performing par excellence, their professional abilities were not questioned.

3rd Engineer Bhagyashree Ogale says, “As women in a male-centric environment, you need to have tremendous mental strength to withstand the pressure. Whenever someone assumed that I could not do something, I worked twice as hard to prove myself and earned their respect. In this industry, you can overcome every challenge if you love your job.”

This change has been a long time in coming. Today, the picture is changing. It is due to the groundbreaking work of these women that girls are becoming more respected in the community. To ensure that the needs of all the women seafarers are addressed and handled properly, the International Women Seafarers Foundation was founded by Capt. Radhika Menon, Ms. Suneeti Bala, and Ms. Sharvani Mishra.

The Role the IWSF Plays

“The IWSF was started to provide guidance and assistance to women in shipping. We noticed that many girls had similar problems in the workspaces, so we decided to have a centralized channel to address these issues”, says Capt. Radhika, the first Indian woman captain and one of the founders of IWSF. The organization has brought together the women of the seafaring community and works to resolve policy-related shortcomings in shipping industries. The strength of these women is reflected in the objectives of IWSF where they take a competency-based approach to gender sensitization.

IWSF is important as a source of information for girls seeking to join the maritime field as well. The foundation gives a clear and first-hand idea to the young generation, explaining the numerous opportunities available in shipping, encouraging them to take forward their dream of sailing the seas.

Tackling issues like women safety on board and the need for a change in policy, the IWSF is revolutionizing life for women seafarers.

Safety for women on ships is a much-discussed aspect when any girl expresses her desire to join the maritime industry. As safety has become a top priority for sailors in the recent years, these worries are unfounded. Ms. Reshma Nilofer says, “Ships are very safe to work on. There are numerous safety regulations in place. Most of the accidents that happen these days are due to human error. However, if all the do’s and don’ts are followed properly, ships are even safer than land!”

Safety equipment plays an important part in safety aboard ships. Although the safety culture differs from company to company, the overall standard of safety in shipping is very high. Every life is valuable.

Ms. Devangan sums it up precisely, “We tend to see safety as an additional measure, it should become an attitude. People in cities tend to wear a helmet only because they know they might have to pay a fine if they don’t. This is wrong. Helmets should be worn for the safety of the individual, not just to save money. On ships, we are into the habit of maintaining a strong safety culture, irrespective of whether or not the ship is up for inspection.”

The advancement in technology has added another dimension to safety and operations on ships. Automation has reduced physical labour. Chief Engineer Rupali Joshi says, “Technology has made everything very systematic. There is an increase in alertness and timely checks thanks to implementation of new technology. The software being used these days has improved alarm systems and made it easier to find possible problems well in advance.”

It is the responsibility of all ship manufacturers and service providers to ensure that the latest gadgets are introduced which can take safety and communication to the next level.

Ms. Nilofer advises, “The one thing that can be improved in safety equipment is that it can be made fool proof. There needs to be only one way of operating it so that there is no room for error. This will make equipment handling easier and regular drills will add to the efficiency of rescue operations.”

There has been a radical shift in perspective, thanks to the amazing work done by the members of the maritime community. It is because of their strength and determination in overcoming prejudices and regressive attitudes that women are now able to sail forward boldly.

From the daring rescue operation headed by Capt. Radhika to save seven fishermen in adverse weather, which made her the first woman in the world to win the International Award for Exceptional Bravery at Sea, to the work of Ms. Reshma Nilofer who became India’s first ever marine pilot, these women have set benchmarks with every deed.

They are truly an inspiration for the young girls of India and we are sure that an entire generation of new seafarers is in the making due to their efforts.

We are very proud of their achievements and wish that they keep scaling greater heights ahead!

One thought on “Women Seafarers in India – Charting New Horizons”

How to Choose the Right Clean Agent Fire Suppression System